What is the heart?

The heart is a conical shaped cavitary organ that is found between the lungs, with the apex facing downward, forward and to the left. The heart is approximately the size of a closed fist.

Its main function is to send blood in the circulatory system, acting as a pump. The flow rate or the amount of blood pumped per minute is on average 5 liters.

The heart is made up of muscle tissue, myocardium, a special type of striated muscle that can't be found anywere else in the body. On the outside it is wrapped in a hard bag of fibrous tissue, called pericardium. The pericardium is made up of two sheets separated by a fine layer of liquid designed to remove the friction that occurs through the contraction and the distension of the heart.

How does it work?

These cells, which have the spontaneous ability to emit electrical impulses, are medicaly called "pacemaker" cells, meaning cells capable of imparting a certain rhythm / frequency to the heart.

The heart's conduction system consists of the following structures: 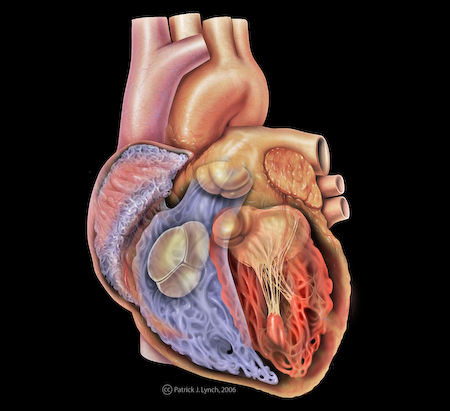 The heart and the circulatory system

The heart consists of four small rooms or cavities: two atria and two ventricles. These cavities, through the functions they perform, divide the heart into two halves, right heart (right atrium and right ventricle) and left heart (left atrium and left ventricle). Physiologically the right heart does not communicate directly with the left one except during intrauterine life.

Communication between the heart's cavities is done through structures called valves. These are thin, fibrous sheets that impress the blood with a unique sense of flow (prevents it from returning). Thus, the right atrium communicates with the right ventricle through the tricuspid valve, and the left atrium communicates with the left ventricle through the mitral valve.

This website uses cookies to improve your experience while you navigate through the website. Out of these, the cookies that are categorized as necessary are stored on your browser as they are essential for the working of basic functionalities of the website. We also use third-party cookies that help us analyze and understand how you use this website. These cookies will be stored in your browser only with your consent. You also have the option to opt-out of these cookies. But opting out of some of these cookies may affect your browsing experience.
Necessary Always Enabled
Necessary cookies are absolutely essential for the website to function properly. This category only includes cookies that ensures basic functionalities and security features of the website. These cookies do not store any personal information.
Non-necessary
Any cookies that may not be particularly necessary for the website to function and is used specifically to collect user personal data via analytics, ads, other embedded contents are termed as non-necessary cookies. It is mandatory to procure user consent prior to running these cookies on your website.
SAVE & ACCEPT